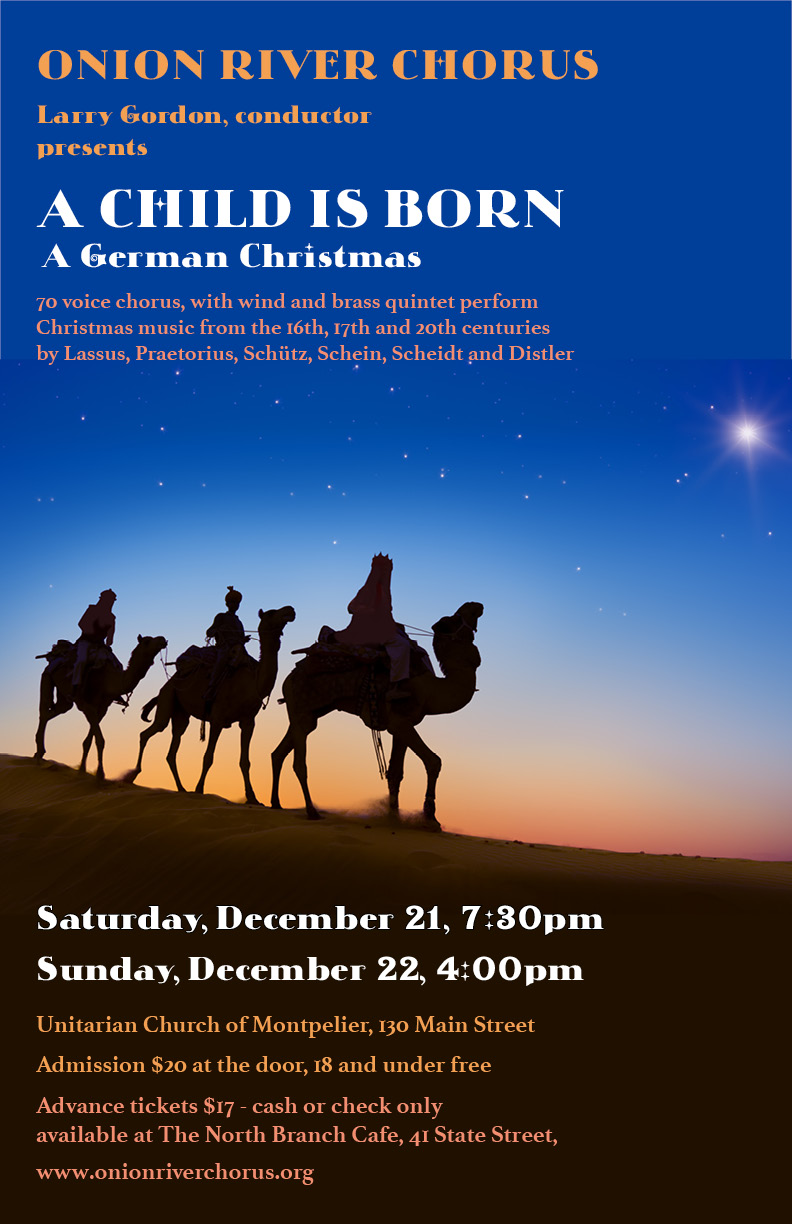 Onion River Chorus, directed by Larry Gordon, presents two concerts of German Christmas music from the 16th, 17th and 20th centuries, including works by Lassus, Praetorius, Schütz, Schein, Scheidt, J.S. Bach and Hugo Distler. The seventy-voice chorus will be accompanied by organ and a quintet of clarinets, horn and trombones.  The concerts are Saturday December 21 at 7:30 p.m. and Sunday December 22 at 4:00 p.m., both at the Unitarian Church of Montpelier, 130 Main St., Montpelier VT. There will be a reception and refreshments following the Sunday concert.

Admission at the door is $20 for adults (18 and over).  Students/children under 18 are free. Discounted advance tickets are available for $17 at The North Branch Café, 41 State St., Montpelier VT (cash or check only).

The works on the program are settings of some of the most well-known and beloved Christmas hymns and melodies in their German or Latin variants: Resonet in laudibus (Let praise resound, Puer natus in Bethlehem (A child is born in Bethlehem), Ein Kind is uns geboren (A child to us is born), Nun komm, der Heiden Heiland) Now come, Savior of the Gentiles), Wie schön leuchtet der Morgenstern (How brightly beams the morning star).

Michael Praetorius (1571-621) was steeped in these German chorale melodies and he returned to them again and again in his compositions.  His five-voice setting of Resonet in laudibus uses the familiar melody in the top voice with inventive harmonies in the lower voices.  His setting of Puer natus begins with a duet of treble voices and then adds an additional harmony part for each successive verse, culminating in six parts, with the melody alternating between the soprano, alto and tenor line.  His remarkable Magnificat super Angelus ad Pastores alternates each of the traditional Latin liturgical verses of the Magnificat with folk-like arrangements of six of these traditional Christmas melodies.

The earliest piece on the program is the five-voice setting of Resonet in laudibus by Orlandus Lassus (1532-1594) featuring constantly alternating duple and triple rhythms and intricate imitative counterpoint.

Heinrich Schütz (1585-1672) , arguably the greatest 16th century German composer, is represented by three pieces: a lyrical four-voice setting of Ein Kind ist uns geboren; a massive seven-voice setting of Der Engel sprach zu den Hirten (the angel spoke to the shepherds), inspired by his contact with the Gabrieli family in Italy, and utilizing the full complement of winds, brass and organ; and a joyous Hodie Christus natus est, with similarly large forces and featuring an exuberant echoing alleluia.

Another large scale work on the program is the eight-voice, double-chorus Das alte Jahr vergangen ist (the old year is past), by Schütz’s contemporary Samuel Scheidt (1585-1654).  Opening with long, plaintive melodies in imitative counterpoint, first in one choir (with one clarinet and organ) and then in the other choir (with the remaining winds and brass), the piece gradually quickens with more and more agitated back and forth alternations between the two groups.  Each new sentence of the text is conveyed with a dramatic new musical theme. This piece is preceded by Bach’s chorale setting of the same text.

The newest pieces on the program are by the early 20th century composer Hugo Distler who was steeped in these same Germany chorale melodies and also highly influenced by the music of Schütz.  His trio setting of Wie schön leuchtet der Morgenstern alternates a cappella verses with a peaceful instrumental ritornello played in our rendition by two clarinets and horn.  His three-voice version of Nun komm, der Heiden Heiland uses the chorale melody verbatim in the top voice with intricate harmonies in the two voices below.